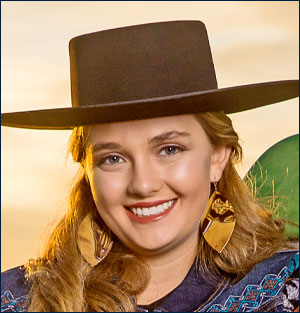 Leanna will be attending the University of Nevada, Reno this fall to pursue a degree in Agriculture Science. She has been actively engaged in several organizations throughout high school including FFA, 4-H, Society for Range Management, National/Nevada/Elko County Cattlewomen, and the Lamoille Junior Livestock Club. Leanna hopes to grow her cow/calf operation she started in 4-H and pursue a career in production agriculture after obtaining her college degree..

Wolves in Nevada, Are They Closer Than You Think?

I once read an article in my local newspaper The Elko Daily Free Press titled “Wolf Den Confirmed in Nevada,” Interested I decided to read. The article said that in February 2017 snowmobilers spotted two wolves in the Jarbidge Mountains. As I kept reading, I came across an interesting sentence. “Of course, today is April 1st, so an April Fool’s Day hoax is in order. There are no confirmed wolves in Elko County, and definitely no wolf dens.” The whole article is a ruse, but this ruse isn’t a complete tall tale.

Due to the near extinction, the wolves were put on the endangered species list in 1974. In 1995 and 1996, 66 Northwestern wolves known as the Alaskan timberwolves were then released in Yellowstone National Park. Since then the U.S Fish and Wildlife Service has been attempting to delist the gray wolves nationally ever since the animals had met the target recovery populations. The wolves’ population currently exceeded that recovery number by up to 300%. The main thing halting the delisting is the Center For Biological Diversity and similar animal rights groups that are constantly suing the U.S Fish and Wildlife Service so that no legislation can occur. Finally, in October 2020, the Trump administration delisted the gray wolves nationally, meaning the management of the animals would be up to the individual states. Many people are excited about this. Others say that the delisting was done not because of science, but solely to get more rural voters for the upcoming election.

Many people in Nevada are encouraging the introduction of the wolf. Wolves were once found in the Silver State but were removed shortly after European settlement, and now people want them back. The presence of wolves placed Yellowstone in better ecological condition. In the National Park, the wolves have greatly decreased the Elk population and how they grazed. This allowed for plants to flourish in places that they were overutilized. For this reason, wolves are described as a “keystone species,” whose presence is vital to maintaining the health, structure, and balance of ecosystems.

But, a healthy ecosystem will not be the case in Nevada. When I interviewed a biologist from the Nevada Department of Wildlife she said that there is not enough wildlife in Nevada to support the wolves, and because of that they will most likely not come. But, according to the International Wolf Center “ ... due to the close proximity of viable wolf populations in Idaho and Wyoming, wolves may move into Nevada.” Not to mention the fact that Wolves are confirmed in Oregon and Arizona. There are also confirmed sightings in Utah and a confirmed pack in California. Nevada is surrounded and so the arrival of wolves is unpreventable. With the lack of wildlife in Nevada, it is inevitable that the wolves would have to turn to other food resources in order to survive including pets and livestock.

Wolves around the nation have been proving detrimental to ranchers despite popular belief. According to Lines of Defense: Coping with Predators in the Rocky Mountain Region, conflicts between wolves and livestock are on the rise. Wolves reportedly killed 8,100 cattle in 2010. But, It is extremely difficult to get an accurate number of how much livestock is killed by wolves every year because many of the animal carcasses are never found. For every confirmed kill, there are probably eight more unconfirmed losses. These wolf killings are also very expensive. In Colorado it is estimated that it cost taxpayers more than $9,000 per wolf in 2018 to investigate livestock depredations and remove problem wolves; and in 2010, ranchers and farmers reported spending $185 million on non-lethal forms of wildlife control.

Unfortunately, that is not the only expense wolves produce. Cattle who have been living with wolves experience PTSD causing an increase in heart and blood pressure after being exposed to wolf scents and sightings. This causes weight loss, lower pregnancy rates, and sickness, increasing management by about $250-$300 per cow. Additionally, data is from collared wolves and cattle show a single wolf encountered the same cow 140 at less than 500 yards in a 137 day time period. The collars also show that cattle are spending less time in riparian areas than before wolves’ arrival, and staying in the open flat areas. There, it is safer for the cattle but there is less food available. This causes the cattle to overuse these areas hurting the rangeland that the ranches, as well as many others, value greatly. The cattle also spend a lot of time bunched up in fence corners where the wolves often comer them. The collars on the wolves show the animals constantly circling the cattle as if they were hunting them. The owner of the ranch where the study was conducted says that he has several animals with wolf bites, and more crippled animals than before. This means that the animals constantly need expensive treatment and cannot be sold due to the injuries and vaccine treatments. The rancher also noticed a serious behavior change in his animals. The animals that were once often worked with dogs chased the dogs, seeing them as a threat. The animals are also extremely standoffish towards anyone who tries to work with them, even the young calves are in a constant fight mode and chase anyone who gets near them.

The rancher also reports seeing wolf tracks 50 feet from his home. And this is not an isolated incident. The collared wolf came within 500 yards of one of the houses on the ranch, where a family with young children live; 307 times in a single summer, putting the family in danger. This proves that wolves are interacting with people more and more and are losing their natural fear. This will prove to be extremely dangerous to anyone who lives near the wolf habitat.

Wolves will also prove to be detrimental to Nevada’s wildlife and rangeland health. An introduction of any animal to an ecosystem causes severe damage to the area and the animals who live in it. The Battle Born State does not have the wildlife to support wolves, especially in large numbers. Due to this, wolves will not only over hunt their natural prey but, prey on other animals such as domestic cattle, and sheep, feral horses, house pets, and the already threatened sage grouse. Wolves’ natural prey consists of many of Nevada’s rangeland grazers and a wolf population will lead them to be overhunted. The loss of the grazers will throw the rangeland out of balance and the land will become greatly overgrown. This overgrowth will then dry out during the scorching hot summers and become a fire danger as we have never seen before. Nevada is the driest state in the United States and often sees numerous wildfires every summer. In 2019 alone there were 46,706 wildfires in Nevada burning 4.6 million acres. But, with the increase of fires larger and more frequent wildfires will burn every year. These fires will then allow the invasive cheatgrass and other invasive species to completely take over the rangeland that was once flourishing with native plants.

Although the overgrowth on the rangeland could be combated by allowing more livestock grazing, it will likely be refused. Due to the high possibility of protection of wolf habitat under the Endangered Species Act at the state level. In addition, the sage grouse and other animals will be threatened or even endangered from the overhunting of the wolves, causing further regulations on the land. But, unfortunately, people will still find a way to blame the rancher. Cattle are often seen as a threat to sage grouse by many people. So, even though the cattle actually protect the sage grouse from predators and will lower the threat of habitat destruction from wildfires, and overall improve the rangeland with responsible grazing, people will not allow cattle to graze. This will be detrimental for the small-time Nevada cattle rancher. This is because Nevada is over 85% public land and ranchers buy grazing permits to graze their animals on public lands. Many ranchers in Nevada rely on these permits to feed their animals. The restricted grazing permits with the additions of the other burdens ranchers suffer the consequences of introducing large predators to ecosystems that have adapted to function without them.

It is important that producers in Nevada learn about all the ways their business and livelihoods will likely be affected by this upcoming nationwide hot topic. So we can be better prepared and get the conversation started with lawmakers and the general population so everyone can be better informed of the issue from all sides so we can do what is best for our state’s wildlife, rangeland, and livestock producers.